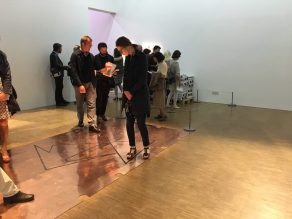 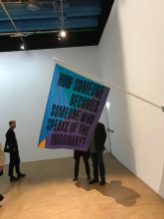 THE FLAG 10: HOW SOMEONE BECOMES SOMEONE WHO SPEAKS OF THE IMAGINARY? 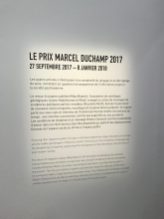 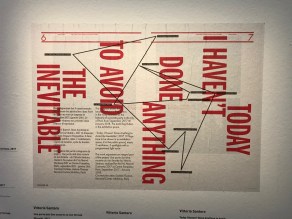 “A DOOR MUST BE OPEN OR NOT CLOSED”

The proposal for the Prix Marcel Duchamp 2017 shown at the Centre Pompidou and titled A door must be open or not closed by Vittorio Santoro is built as a set of “signs” spread out in the museum space as well as throughout the urban space.

Depending on the type and order of the signs, the perception of the work will be orientated so that the spectator may apprehend it in a different way. The circuit will start in the museum space, then unfold in Paris in nine different areas, unless the museum space is to be considered as the end of the circuit.

The artist has asked private individuals to hang from their balconies a flag bearing a text, a sort of aphoristic message.

The exhibition space opens (or rather it “unopens”) onto a hanging wall. Its centre bears a window on which a bevelled blade is fixed, simulating a guillotine blade; through this opening the spectator can see the other signs that are successively positioned in the space and can decide to end his/her experience at this stage.

Those who choose to enter take one of the openings that have respectively been created to the left and to the right of the wall.

The visitors can then cross over a puzzle made up of copper pieces laid on the floor, on which is a screen-printed diagram, that progressively deteriorates with the wanderings.

Continuing their route, they encounter a hanging wooden plank whose extremity touches the floor, as well as a flag that creates a formal link with another part of the presentation.

In the museum space, nothing is imposed or necessary: the spectators have chosen to enter the space, to walk on the copper elements, and then to go further.

The guillotine blade is the articulation between the two parts: it directs the gaze that is possibly cut, sliced and suggests a sort of rebus (to have a “sharp” gaze).

The spectator is brought to analyse the signs that he/she sees beyond this window, directly in the museum space and more metaphorically outside, when he/ she exits the space.

He/she is invited to “look upon” the piece that can only be complete if he/she accepts to experiments all of its components. The two contexts oscillate between symmetry and asymmetry: the spectator who sees the presentation inside the museum knows that it is only a part of it and that other signs are spread throughout the city. Conversely, the people who only see the areas chosen by the artist in the urban space do not necessarily know that they are linked to a presentation in a museum.

With these different readings, Vittorio Santoro suggests the complex ambivalence of our gaze, of our experiences and the dangers that their limits confront us with; the importance of choice as censorship.

Vittorio Santoro wanted to create situations that implicated the spectator’s participation, who is aware of being confronted with an artistic discourse here; whether he/she remains at the foot of the exhibition wall, whether he/she enters, goes into the city, or walks through the whole circuit, necessarily according to an order that he/ she would have decided (but do we really decide?), he/she can, willingly or not, close doors.

These choices are a sort of distorting mirror, reflecting the spectator’s expectations, his/her questions, uncertainties, possible illuminations or, on the contrary his/her indifference, confronting him/her to him/herself and his/ her habits.

The artwork is inhabited and experienced in this way: the road is more important than its end, and the signs only count commensurate with the use that the spectator has of them. However, whatever he/she chooses, consciously or not, his/ her action erodes the sign (the puzzle silkscreen), troubles the experience, upsets its meaning and endlessly leads towards other choices that should all remain open. “A door must be open or not closed”.