Opening Moves (Valuable Qualities of the Mind to be Acquired as to Become Habits), 2011

vintage chessboard
(50 x 60 cm), two oak plates
(65 x 40 cm / 58 x 33 cm)
with three engraved synthetic plaques affixed to the plate’s edges (one on the larger plate, two on the smaller one) and newspaper clippings (on each of the two other ones’ edges), suspension devices, steel wires.
Unique (+1 E.C.) 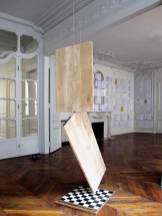 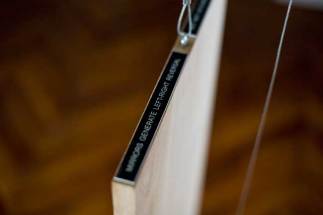 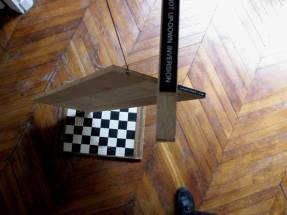 The person who exhibits the work decides on which chessboard square the one oak’s plate angle will be positioned. On one of the two borders of each wooden plates, one engraved text on synthetic plaque and a newspaper clipping are applied, respectively. The plates may be suspended in one direction or the other. By deciding which side to suspend, one decides de facto to show the engraved texts and to impede the sight of the newspaper clipping, and vice versa.

***
Chess games are loosely divided in three phases: the opening, middlegame and endgame. A chess opening is the group of initial moves of a game (the “opening moves”). Recognized sequences of opening moves are referred to as openings and have been given names such as the Ruy Lopez, Sicilian Defence or Alekhine’s Defence. The ALEKHINE’S DEFENSE (named after Alexander Alekhine, who introduced it in the 1921 Budapest) is an underrated alternative for a player seeking a fighting defense that begins with the moves: 1. e4 Nf6. It avoids the reams of analysis associated with the Sicilian Defense, but it is forcing and offers white few choices that avoid an unbalanced game. It is also helpful that many white players underestimate it and spend more time on other defenses. The Alekhine’s defence has a provocative strategy of tempting the White pawns forward, and as we all know pawns cannot go backwards!

I was very much tempted to work on a sculptural object having in mind these information about the Alekhine’s defence: the risky strategy, the confrontational attitude, and the connected expectations.