Entire daily Newspaper (The New York Times), metal salt etching (describing the path of a walk on May 3rd, 2016, to find the Minton’s club in Harlem, NYC, where Jazz piano player Thelonious Monk used to play in the 1940’s) on copper board (3mm), 73 x 92 cm
Unique 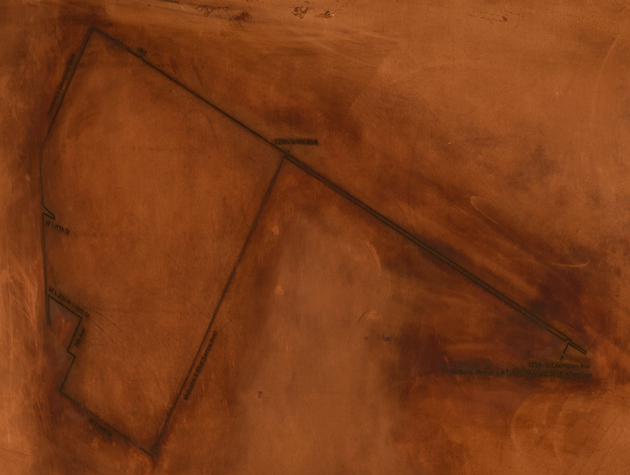 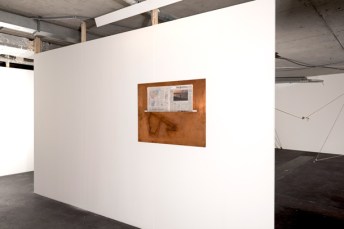 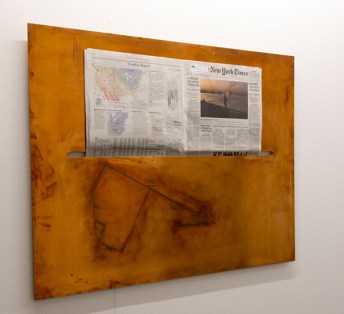 Photo: Marco Blessano,
© Vittorio Santoro
Installation view: Counter Space, Zurich, June 2016
A representative national newspaper–The New York Times–is pulled by the slot of the copper plate and enable to read only a half of the news-paper. A Newspaper gives certain worldview and suggest some objectivity. Each of the two copper plates are equipped with engraved diagrams–so-called „ walks“–combined with lines, straight lines, terms that are etched in the copper plates. They indicate paths that I have walked in NYC on looking for traces of jazz musician Thelonious Monk (1917-1982), who was well known for his art of improvisation (L.F.Th.M. =
Looking for Thelonious Monk).

There is no direct relationship between the newspapers with their front pages, news and dedicated news from the world and my individual, Monk Tracing. Only the copper of the plates–in addition to silver, the metal with the highest con-
ductivity, which I try here to use in its metaphorical way–gives note on the fact that between the seemingly impersonal, social universe the newspapers and my private, idiosyncratic re-
search it possibly might be a sort of transfer.